Release Date: July 16th, 2016
Studio: Pokemon Company
Genre: Animation
In 2016, the new animated adventure Pokemon XY & Z the Movie will premiere in Japan. Unlike any Pokémon discovered before it, this Pokémon is both a Fire and Water type. It uses fire and water to create steam within its body, expelling explosive shock waves and boiling steam from the arms on its back. The power is said to be great enough to blow away an entire mountain, gouging out the earth and changing the shape of the land.Pokemon xyz the movie animation movie 2016
Trailer Link : [Animation Movies 2016 ] 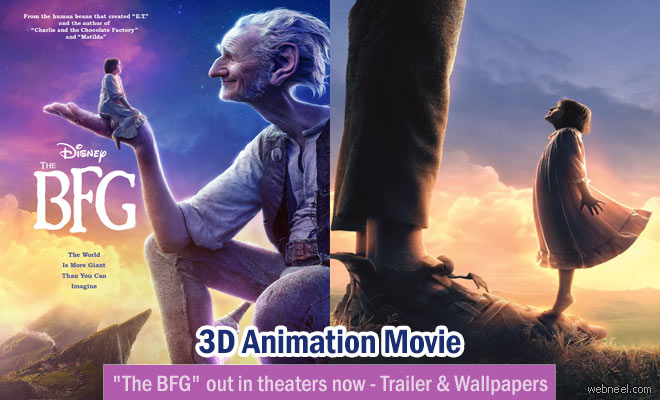 "The BFG" - Walt Disney Pictures is a 1982 book adaptation by Roald Dahl, which goes by the same name. It was released on July 1st 2016 in America. Catch the amazing friendship between a giant and a little girl in your nearest IMax theatre. It's has taken quite a while for the much awaited book adaptation movie 'The Big Friendly Giant' to hit the silver screen. Producers Frank Marshall and Kathleen Kennedy began development for a big budget adaptation way back 1991, and Robin Williams was talked about for the lead role in 1998. But it's director Steven Spielberg who's finally got the oversized one into cinemas for 2016. With some CG magic courtesy of Weta Digital, this looks likely to enrapture a new generation of kids the world over. Spielberg stated, "The BFG has enchanted families and their children for more than three decades. We are honoured that the Roald Dahl estate has entrusted us with this classic story.

Release Date: July 22nd, 2016
Studio: Blue Sky Studios, 20th Century fox animation
Genre: Animation, Adventure, Comedy
Scrat’s epic pursuit of the elusive acorn catapults him into the universe where he accidentally sets off a series of cosmic events that transform and threaten the Ice Age World. To save themselves, Sid, Manny, Diego, and the rest of the herd must leave their home and embark on a quest full of comedy and adventure, traveling to exotic new lands and encountering a host of colorful new characters.Ice age collision course animation movie list 2016
Trailer Link : [Animation Movies 2016 ]

Kubo and the Two Strings

Release Date: August 12th, 2016
Studio: Nitrogen Studios Canada, Annapurna Pictures, Point Grey Pictures
Genre: Animation, Comedy
Sausage Party is a raunchy animated movie about one sausage’s quest to discover the truth about his existence. After falling out of a shopping cart, our hero sausage and his new friends embark on a perilous journey through the supermarket to get back to their aisles before the 4th of July saleSausage party animation movie list 2016
Trailer Link : [Animation Movies 2016 ]

Release Date: September 23, 2016
Studio: Warner Animation Group, Warner Bros Animation
Genre: Animation, Comedy, Family
Storks deliver babies…or at least they used to. Now they deliver packages for global internet giant Cornerstore.com. Junior, the company’s top delivery stork, is about to be promoted when he accidentally activates the Baby Making Machine, producing an adorable and wholly unauthorized baby girl. Desperate to deliver this bundle of trouble before the boss gets wise, Junior and his friend Tulip, the only human on Stork Mountain, race to make their first-ever baby drop – in a wild and revealing journey that could make more than one family whole and restore the storks’ true mission in the world.Storks animation movie list 2016
Trailer Link : [Animation Movies 2016 ]

Release Date: 25 December 2016
Studio: Black Marsh Entertainment
Genre: Animation, Fantasy
Lewis Clark is a brilliant author who stumbles upon a world of Magic after the disappearance of his two young children. He begins a quest to try to stop the insidious evil that threatens to destroy both his new world and his old one.

Release Date: 2016
Studio: Bron Studios
Genre: Animation
In a world of super-villains, evil schemes and global domination, someone has to take out the trash. Welcome to the world of Henchmen, third class. When a fresh-faced new recruit joins the Union of Evil, he is assigned to a motley crew of blue-collar workers led by fallen henchmen Hank. But when The Kid accidentally steals the super villain's ultimate weapon, Hank must break his risk-nothing code to save the boy he's befriended, even if it means becoming the one thing he has always avoided being: a hero.Henchmen animation movie list 2016
Trailer Link : [Animation Movies 2016 ]

Release Date: 18 December 2015
Studio: Sony Pictures Animation
Genre: Animation
The movie opens with Elliot telling a campfire story about the legend of the Wailing Wampus Werewolf that lives in Timberline National Forest. Domesticated Boog is terrified by the story and decides to "chicken out" of their annual summer camping trip until he knows the werewolf is gone. Determined to help Boog overcome his fears, Elliot and their woodland friends band together to scare the fear out of Boog and uncover the mystery of the Wailing Wampus Werewolf.Open season scared silly animation movie list 2016
Trailer Link : [Animation Movies 2016 ]