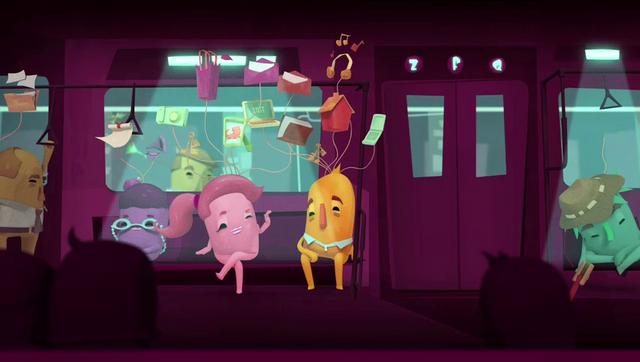 We like our stuff. Do you like your stuff? Protect your stuff.
Here's our latest for Norton via Leo Burnett Chicago.

Information on Norton “Stuff Anthem” from Psyop’s Fletcher Moules, who was creative director on the spot along with Laurent Ledru.

No, not just "stuff" with a small "s," but Stuff. Your Stuff. The Stuff that lives on your hard drive, your devices, and on the web. Your Stuff is more than just data. It's your life. The Stuff that connects you with the people you love. The Stuff that puts you on the grid as a contributing member of society. It's who you are Stuff, where you've been and where you're going Stuff.

For “Stuff Anthem” we took this idea of Stuff and embodied it in a character and follow him through the world as he grows up, adding more stuff to his life and trying to hold onto and keep track of all the stuff he has.

Visually, we gave the character a cute likeable look and personality and the world around him a handmade ink and watercolor feel. We didn’t want anything to feel overly slick or techy. It’s all imbued with a bit of whimsy and fun. As the spot moves along, the visuals build and get more complex as our main character gets more stuff and tries harder and harder not to lose it. The color palette we used was also very important in the narrative journey. We developed a base palette from the Norton’s brand and this set the tone for beginning and end. However, we wanted the viewer to feel like they went on the journey with Mr. Stuff. When things got tough for him, so did the palette.

We really wanted the animation and the story to unfold as simplistic as possible. The aim was to create a handcrafted world for a software company. Though the characters are all 3D, our intention for the campaign was to have a traditional 2D feel. In order to achieve this, in the timeline we were given, we relied heavily on new techniques in digital production – all the characters are 3D, the backgrounds are projected in Nuke and AE, and much of the character lighting is done with Nuke’s Relighting tools using Normals passes. At the same time, we used some pretty old school animation techniques, like when the taxi takes off and heads to the town.